John Wenger is a Professor of Physical Chemistry at University College Cork (UCC) and joint founder of the Centre for Research into Atmospheric Chemistry (http://www.ucc.ie/en/crac/). He is also leader of the Atmospheric Processes and Air Quality thematic research area within the Environmental Research Institute.

Prof. Wenger has over 20 years research experience in atmospheric chemistry and has been involved in a large number of National and European projects. His main research interests are in the atmospheric degradation of volatile organic compounds and the chemical composition of atmospheric aerosols.

His work has resulted in over 85 publications in internationally renowned journals and a similar number of published conference proceedings and research reports. He has a h-index of 24 and received more than 2500 citations (May 2016).

Dr Wenger is an established member of the Atmospheric Chemistry community in Europe and was involved in several collaborative projects in the 5th, 6th and 7th Framework Programmes. He was a principal investigator in the EU Integrated Infrastructures projects EUROCHAMP and EUROCHAMP-2 and is currently a national delegate for the COST action EUNETAIR.

Dr Wenger has been awarded over 40 separate allocations of research funding from a range of national agencies and the European Commission. Total research income is in excess of €4.9M, with €3.2M raised as sole PI and €1.7M as joint-PI. He has continuously been in receipt of EC funding since 2000 (awarded 7 EC-funded projects amounting to more than €1.6M).

He has given more than 30 presentations of his research at international conferences and workshops (two invited plenary lectures),  and ca. 15 invited research seminars at various universities and research institutes in Europe.

During his 15 years at UCC, Dr John Wenger has supervised 18 postgraduate students and 12 research staff, including 3 Marie Curie Fellows. He has initiated collaborations with over 20 leading atmospheric science research groups in Europe and hosted 6 PIs and 15 researchers from 6 different countries.

He teaches many aspects of physical, environmental and atmospheric chemistry at all levels of the Chemistry Degree Programmes in UCC.

I lead a research group which is part of the Centre for Research into Atmospheric Chemistry (CRAC; http://crac.ucc.ie/) based in University College Cork.

The current research interests are focussed on (i) the atmospheric degradation of volatile organic compounds, (ii) formation and characterisation of secondary organic aerosol, (iii) chemical composition and sources of atmospheric aerosol. Laboratory based experiments are performed in custom-built atmospheric simulation chambers and utilise state-of the-art techniques for on-line and off-line chemical analysis.

My research team has made significant contributions in this area through improved understanding of atmospheric degradation processes, identification of reaction pathways for secondary organic aerosol formation and development of new methods for detection of atmospheric oxidation products.

The research group is now well established within the global atmospheric chemistry community and has collaborated extensively with colleagues from around Europe. I have been involved in the following EC-funded projects; EXACT, IALSI, EUROCHAMP, ACCENT and EUROCHAMP-2.

Since 2008, the research group has become increasingly involved in the chemical composition of ambient aerosol, with an emphasis on single particle mass spectrometry. The UCC team has co-ordinated and participated in several collaborative projects in this area and has made field measurements at numerous locations including; Cork City (2006, 2007, 2008, 2009), Mace Head (2008), Paris (2010), Barcelona (2010), Cork Harbour (2011), Dunkirk (2012), Corsica (2013).

I currently teach a wide variety of subjects at every level of the BSc Degree programmes in Chemistry, Environmental Science and Chemical Physics. My contributions to 1st and 2nd year modules are in physical chemistry, whilst in 3rd and 4th year, I teach subjects related to my research interests in environmental and atmospheric chemistry.  I have also taught mature students taking the part-time evening BSc Degree in Environmental Studies/Management and science teachers taking the Master of Science in Education, MEd(Sc). 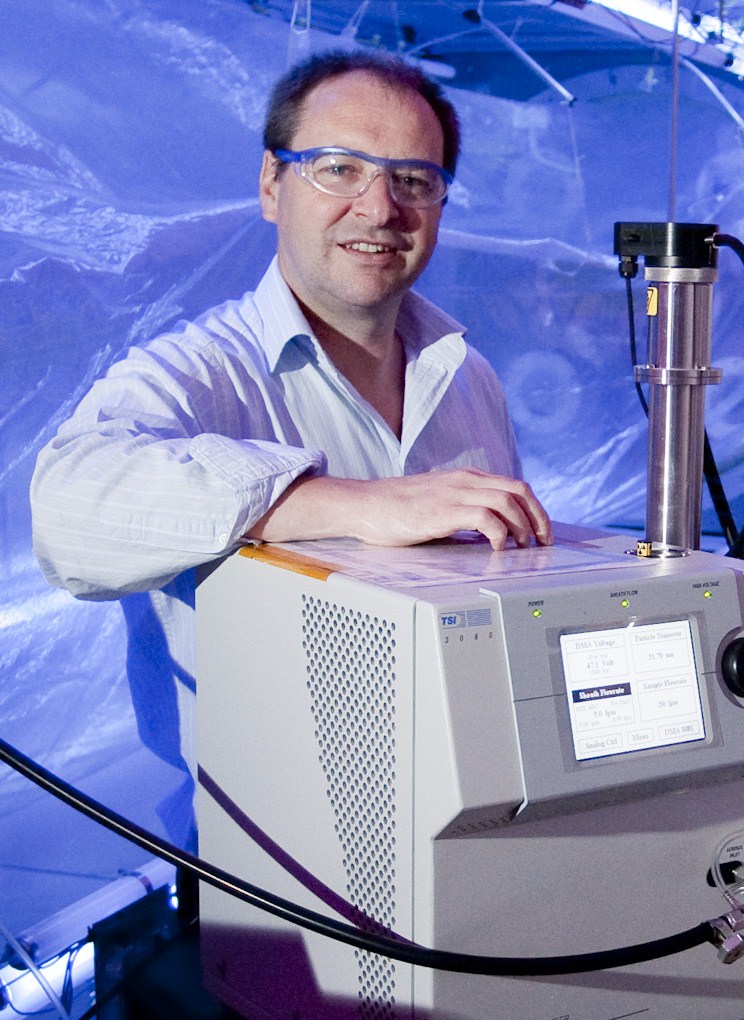