Eoin is a Lecturer in plant science and Principal Investigator at the School of Biological, Earth and Environmental Science (BEES) and the Environmental Research Institute (ERI) at University College Cork.
His research interests include plant pathology, biological control, soil biology, sustainable agriculture as well as the role of urban trees and green spaces. He is PI and Co-PI on a number of ongoing projects in the areas of sustainable agriculture and urban trees/green spaces. His research has been funded by the Irish Research Council, Science Foundation Ireland, Department of Agriculture and Enterprise Ireland, amongst others.
Eoin is Co-PI on the "UCC Open Arboretum Project" and the SFI-funded "Tree Explorers" and "Tree Explorers 2" projects which make use of the newly-accredited UCC Arboretum for research, teaching and outreach. Eoin is a vocal advocate for urban trees.
Eoin teaches various modules across a broad range of academic programmes including the BSc Applied Plant Biology, Diploma in Specialty Food Production and the Postgraduate Diploma in Irish Food Culture.
Eoin serves as the School of BEES' Exams Officer (2019-present). He also manages the School of BEES website and the School's social media platform.
Eoin has previously served as Treasurer of the International Association for Plant Biotechnology (IAPB) from 2014-2018 and was member of the IAPB Executive Team as well as being a member of the National Organising Committee and International Committee for the International Association for Plant Biotechnology Congress which took place in Dublin in 2018 (IAPB2018). He currently serves as a member of the International Committee for IAPB 2024 which is scheduled to take place in Korea in 2024.Eoin was a member of the President’s UCC Delegation to COP-26 negotiations in Glasgow in 2021. UCC remains the only Irish university with Observer status under the UN  Framework Convention on Climate Change (UNFCCC).Eoin is a recognised figure in local and national media speaking about his research as well as cognate areas of public interest (e.g. climate change and biodiversity). He has appeared on RTE Radio; RTE News; and a range of local radio stations and his activities have been highlighted in a range of publications: e.g.  Irish Examiner, Irish Independent, The Guardian, Irish Times, etc. He has written opinion pieces for publications such as Irish Examiner, RTE Brainstorm, The Conversation and The Guardian.
Eoin holds a BSc in Plant & Microbial Biotechnology (2002), a Masters in Teaching and Learning in Higher Education (2011) and a PhD in Plant Science (2014).
‍

Eoin’s research broadly falls under the umbrella of sustainable horticulture and food production. He has particular expertise with organic production systems but also works on the incorporation of environmentally-protective crop production methods in conventional agriculture. For example, he has published significant research in terms of the environmentally-protective management of potato cyst nematodes (PCN; Globodera spp.) – work that is relevant in conventional as well as organic agriculture. He has developed novel biological control measures for PCN using bacterial isolates from the rhizosphere (the root-soil interface). In recent years, Eoin’s research interests have broadened to include the role of plants, trees and green spaces generally in building sustainable cities. In all his research, the topic of environmental sustainability is a central focus. This focus on sustainability led to his being appointed to UCC’s President’s Delegation to COP26 at Glasgow in 2021. Here, Eoin held official Observer status to the Conference of Parties (COP) negotiations under the United Nations Framework Convention on Climate Change (UNFCCC). These negotiations led to the Glasgow Climate Pact.

Specific research interests include:
Eoin is a member of the Scientific Advisory Panel of the CUBA (Community University Biodiversity Action) project, a partnership between SECAD, Wildwork, various Cork communities and UCC. The initiative supports a range of partnerships and activities aimed to build capacity to address Ireland’s biodiversity crisis. In particular, Eoin has been a central figure in developing the ‘Significant Trees’ project for CUBA and in creating online resources for individuals to survey important trees in their own communities. He was Principal Investigator on the South Parish Tree Audit project, a collaboration between his research group and community partners in Cork city.Eoin has published in a range of peer-reviewed journals including (e.g. Plants, People, Planet; Biology and Environment; Nematology) as well as publishing a range of other outputs including editing a special issue of In Vitro Cellular and Developmental Biology – Plant; and co-authoring the globally important ‘Sate of the World’s Plants and Fungi’ report in 2020. Eoin contributes regularly to national and international conferences (25 such contributions since appointment to current post) and regularly delivers public lectures on research topics (e.g. ERI Webinar Series 2020; Cork Literary and Scientific Society Programme 2022)

Eoin currently teaches on supervises (*indicated by and asterisk) the following modules:BL1002 Cells, Biomolecules, Genetics and Evolution BL1009 Grand Challenges in BEES PS1801* Food Production and the Environment AE2007 Ecological Fieldwork and Analysis PS2001* Introduction to Plant Biotechnology BL3001 Zoology and Ecology Literature Review PS3003* Plant Science Literature Review PS3020 Plant Biology Field Course PS3021 Practical Skills in Plant Biology BL4001 Research Project EV4001 Environmental Science Research Project PS4021* Sustainable Plant Pest and Disease Management PS6801* Food, the Environment & Sustainability
Eoin holds a Certificate (2009), Diploma (2010) and Masters (2011) in Teaching and Learning in Higher Education. His MA research was on the “Student attitudes to Web 2.0 for Teaching and Learning”. Eoin was nominated for the student-nominated College of SEFS Staff Awards in 2021 and holds a President’s Award for Research into Innovative forms of Teaching and Learning (2014). In addition to his regular teaching (Table 1) Eoin delivers regular talks to various BEES student groups on plagiarism policy and scientific writing. He has served as the Exams Officer for School of BEES since 2019. Eoin has been a leader in the resurgence of interest in the UCC Arboretum for teaching. He co-delivers popular teaching sessions within the arboretum for first-year BEES students and third-year Pharmacy students.
‍ 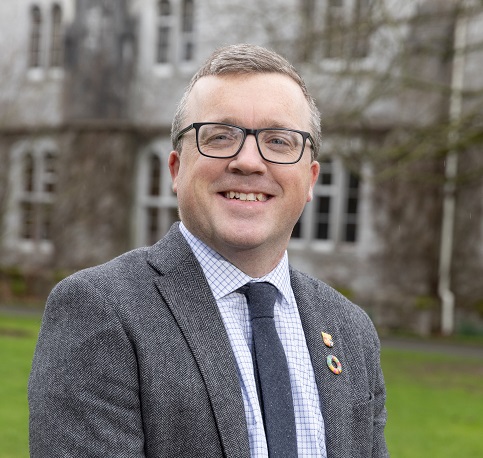