My research interests are focused on the processes associated with magmatism. Currently active areas of research include:

·      how can magmatic and magnetic fabrics in igneous rocks help in the construction of ascent and emplacement models for the complexes under consideration?

·      can these models be integrated with regional tectonics and precise geochronological data to elucidate the kinematic evolution and strain history of the orogen at the time of emplacement?

·      can the magma flow pathways suggested in these models be used in predicting the migration of mineralizing fluids in the crust such as those reponsible for generating economic ore deposits?

During my own Ph.D. research it became apparent to me that many of the existing problems in understanding the evolution of igneous complexes were failing to be resolved due to the lack of focussed research collaboration and interaction between petrologists, structural geologists, geochemists, field geologists and tectonic modellers.  The significance of much excellent work in these fields was failing to be noticed or understood by other workers in related areas and scientific advancement therefore suffered.

I have therefore attempted to position myself at the interface of these research areas, have kept currency with relevant research on all these fronts and have directed projects that involved a combination of techniques and substantial academic interaction to guarantee progress.  The over-riding ethos of my research therefore has always been to develop and maintain national and international collaborative links within a range of sub-disciplines and to bring these experts together in a focussed effort to create a novel environment in problem solving.  This approach has been and continues to be highly successful. I am totally committed to high calibre research of international significance in these areas and my work is currently focussed on the Caledonian granitoid complexes and the Palaeogene intrusive complexes in the UK and Ireland. I have also participated in two research expeditions to Southern Greenland and one to the Indian Himalaya.

The data collected, the models presented and the published and conference contributions made to date dictate that this collaborative research team is recognised as being at the forefront of this work in the UK and Ireland.

The results of this research have made substantial contributions in several areas:

(i) For decades there has been a recurring problem regarding the nomenclature of terminology concerned with the upward movement of magma through the continental crust.  Our work (Jacques & Reavy 1994) first proposed and defined the critical distinction between magma ascent (transport) and magma emplacement (arrival); these terms are now generally accepted and in common usage by other workers in this field.

(ii) By collecting a unique structural database and presenting ascent and emplacement models for many of the Caledonian granitoid complexes in Scotland and Ireland, we have demonstrated convincingly the fundamental role of tectonics on the siting of magmatism and shown how lithospheric structures control all aspects of magma transport and pluton amalgamation and construction (Hutton & Reavy 1992,  Jacques & Reavy 1994).

(iii) Traditionally many granitoid complexes are portrayed in cross section as large intrusions with steep outward dipping contacts implying huge bodies at depth with no clear downward termination.  Field mapping and structural analysis in Portugal (Reavy 1989) and Scotland (Jacques & Reavy 1994; Zaniewski et al. 2006)  convinced me that such bodies are in reality flattish or gently inclined sheets, perhaps only a few kilometres thick, with discernable demonstrable roofs and floors. Subsequent to my early publication on this subject, many workers have now recognized such geometries as a global phenomenon and many granite bodies are now accepted as having this profile.

(iv) The concept of mixing and mingling (coexistence) of batches of magma of contrasting composition (mafic-felsic), viscosity and temperature has been recognized in plutonic and volcanic rocks for decades, and the petrological significance of the process in terms of mantle-crust interaction and granitoid genesis is now well understood and generally accepted.  Our work (Grogan & Reavy 2002) has recognized the significance of mixing between batches of melt of similar composition (felsic-felsic mixing).  This latter process is much less obvious than mafic-felsic mixing and shows that large apparently isotropic bodies of granite are in fact likely to be constructed by the amalgamation and mixing of numerous batches of melt of similar composition.

This idea links with magma transport concepts discussed in (i) and (ii) above and clearly shows the benefits of this multidisciplinary approach to understanding magmatism.

(v) Other work has focussed on emplacement of gabbroic bodies in anorogenic settings.  Many models for high-level emplacement of igneous bodies were developed in the Palaeogene complexes of western Scotland and northeast Ireland.  In particular the concept of ring-dykes was proposed for e.g. Slieve Gullion, the Mourne Mountains (Ireland) and the Great Eucrite of Ardnamurchan (Scotland), the latter being widely regarded and cited as the classic ring-dyke for over 70 years.  To qualify as a ring-dyke it must be demonstrable that magma ascended along a vertical to outward-dipping concentric ring-fracture, accompanied by block subsidence related to caldera collapse.

Our work, using a combination of field mapping, structural measurements of primary magmatic features and anisotropy of magnetic susceptibility (AMS) data have led to dramatic reinterpretations of the emplacement of the Great Eucrite (O’Driscoll et al. 2006) and the Slieve Gullion ring complex (Stevenson et al. 2008).  It is proposed that the Great Eucrite is in fact a lopolithic body and the famous “Ring of Gullion” is topographic in origin and the ring intrusions are in reality flattish domed intrusions and volcanics.

The establishment and maintenance of a strong postgraduate group has aided such a substantial research effort.

·       encourage highly motivated and able undergraduates who are interested in these topics to carry out their undergraduate research projects under my supervision with a view to joining my research group if funding is available,

·       integrate present research into Honours teaching to give a flavour of the research currently underway.

Since I arrived in UCC, I have supervised 7 PhD research students. The titles of these theses and the impact of the research are detailed below.

The structural and metamorphic features of the central and southern parts of the Leinster Granite Complex, SE Ireland.

The Emplacement of the Newry Igneous Complex, Northern Ireland.

The Petrogenetic Evolution of the Leinster Granite Complex

Publication of one of the principal conclusions of this thesis (Grogan & Reavy 2002) conclusively demonstrated that complex mixing of batches of magma of similar composition commonly occur, a process not previously fully appreciated.

This work (Zaniewski et al. 2006) provided the first unequivalent evidence for a Scottish Caledonian granite complex having the geometry of a gently inclined tabular sheet with a mappable floor and roof.

Research resulting from this thesis (O’Driscoll et al. 2006) and subsequent work (Stevenson et al. 2008) has completely revolutionised our understanding of the structure, emplacement mechanisms and geometry of Palaeogene mafic intrusions.

This thesis focussed on the earliest phase of magmatism in the Galway granite complex. Field and magnetic data have allowed the constuction of elegant new emplacement models for the granites under study and by linking these data to new geochronology and regional tectonics the granites concerned can be used to demonstrate the kinematic evolution and strain history of the orogen at the time of emplacement. 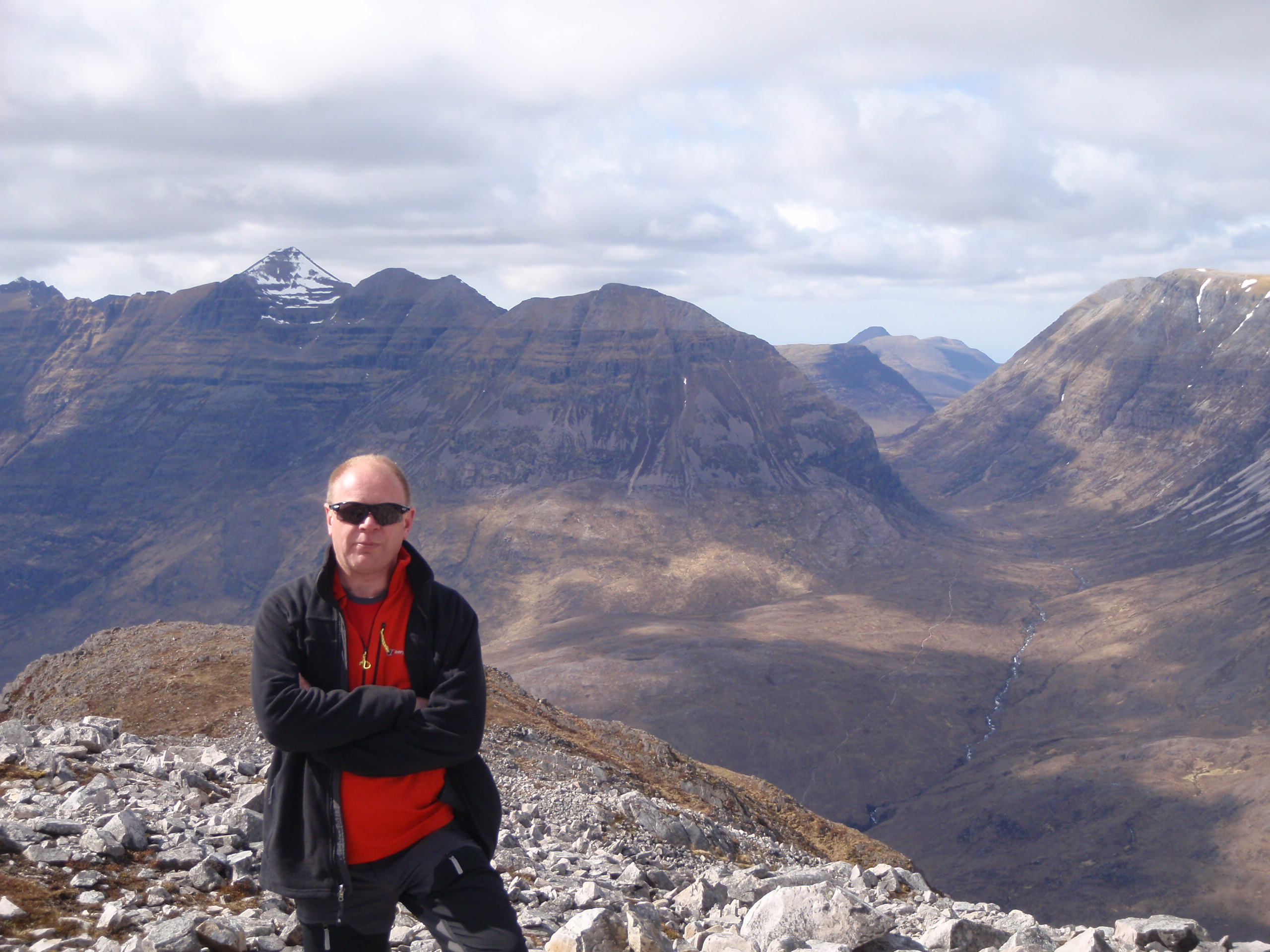